Mobile first strategy, last in the implementation cue: why?

A lot of SMBs hear about mobile first and even speak about it. Few actually grasp the idea fully. Not because it is a complicated idea; far from it. But because it is rarely boiled down to its essence: mobile first is a shift in perception. The moment you get it that smartphones are the computers of future: miniature, versatile, contextualized. And that everything is going to be build for this type of computer in the next decade at least.

Mobile first is a concept that probably made its internet entry back in April 2009 at Web 2.0 Expo in San Francisco. Based on this old ReadWrite post by Sarah Perez, Marc Davis - then at Yahoo - pleaded for "services designed to take advantage of the strengths and abilities of the mobile devices themselves, leading to entirely unique creations that can only be found on the mobile web". He named this strategy or approach - mobile first.

Davis pointed out that the mobile experience is not just a desktop experience on a smaller device; a developer gets access to the following categories of information that the phone already possesses: who you are, when you are, where you are, and what you're doing.

Nowadays mobile devices are everywhere, and Davis seems to have hit upon a true prophecy. However, it doesn’t take long to see that the world has yet to fully grasp the effects of this disruptive technology and there is no agreement if mobile first is actually still in play. Some suggest that we are witnessing an extinction level event for everything that is not mobile: if you are not mobile you will join the dinosaurs. Others point out that investing in mobile apps proved to be far less effective than initially expected and that a mobile first approach needs a lot of qualification.

So, six years after: are we going towards mobile first or not?

To understand where we are headed it helps to look again into the past. When the world at large discovered internet at the end of the '90s, desktops not only ruled, they were the only game in town. Everything that was built was built for the desktop. Not only that, several generations of professionals connected in some way or another with web-building "grew up" in the desktop world. A world where desktops = computers, more or less (supercomputers notwithstanding).

Since the arrival of the smartphones, the mobile segment is clearly becoming the dominant one in many respects and makes demands that are increasingly dangerous for businesses to ignore. Well-established websites had to find a way to accommodate the new crowd. It was then that the desktop assumption started to be challenged. And the assumption that was being challenged was this: desktops do not equal computers. 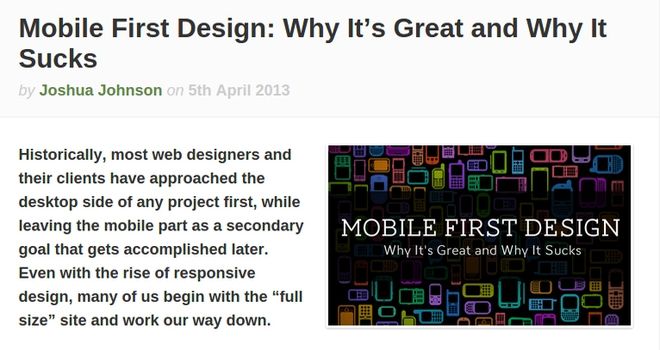 Joshua Johnson post on Mobile FIrst Design (published in 2013, April 5th) is a great summary of the shift in how this problem is being approached; very much worth reading today, if you’ll take my word for it. Essentially, he argues, people started thinking in terms of a choice between graceful degradation or graceful enhancement. The former "degrades" content progressively as the screen size decreases; it starts with the desktop, develops the concept fully and then starts culling out things to fit them to the smartphone screen (or, the unknown then wearables). The latter proceeds in the reverse: if finds the core of what it wants to say online and then gracefully expands on it as more screen "real estate" becomes available.

Even if, on the surface, both approaches seem to lead to identical results, a good argument can be made that they actually don’t: graceful enhancement means you know the essence of your message before you actually start the process. A very useful approach that countless of failed companies stand in witness for, even if quite unwillingly.

If you are businessman and you simply want a good rule of thumb by which to navigate the shifting currents of the digital world, here it is: smartphones are, in fact, computers. But computers that differ from your mental image of computers (namely, the desktop) in that they are: portable, integrating, sensitive and social. In fact, smartphones are better, more versatile computers that we need to start building for: apps, websites and operating systems.

Portability
Take the first thing I’ve mentioned about smartphones: i.e. portability. It means, at the very least, that your phone knows where you are dynamically. This opens a whole host of possible advantages for this portable computer. I will not go into them, except to point out that smartphones that take into account location information can offer valuable information, offer links to nearby points of interest (commercial or otherwise). Simply put: an unbeatable advantage.

Ability to integrate
Because of its portability, pressure was put on engineers and designers to make the smartphone able to integrate flows of information to and from various devices. Smartphones can "talk" to your desktop, cloud resources, GPS in your car, iBeacons at various commercial venues and - increasingly - various wearables. When something becomes a hub, you better be investing in it: cities at the hub of commercial activities, buildings at the center of busy districts, labs at the core of cutting edge development, or, devices that are designed to be at the center of our digital lives.

Sensitivity
Smartphones acquire more and more senses: accelerometers, infrared, UV... and the least can go on and on. Brainware pickup is perhaps the most exotic, but not nearly as useful at the moment. Desktops, of course, can be upgraded to all that. But not being portable, there is less reason for massive adoption. Essentially, smartphones will continue to gobble up new capabilities at a faster rate than desktops can.

Sociability
Perhaps the most alluring quality of the smartphone is the fact that it is helping you maintain and take advantage of your social network. Letters used to do that for a long time; telegraph, radio and internet, each, helped us do it. Social needs created hugely expensive networks of communications that are difficult to manage and all but impossible to get rid of. Since we are fundamentally social beings, anything that helps us to be more social, better at social, less expensively social is going to be invested in. Just about a month ago, Benedict Evans wrote well about the reasons smartphones a better suited for our social network here.

Once you realize this simple idea, things will start to click in place. That "mobile first" is not simply a trend. It is here to stay. Alphatech can help you be mobile first!