Customer interface - the 'thin red line' that divides the living from the dead? 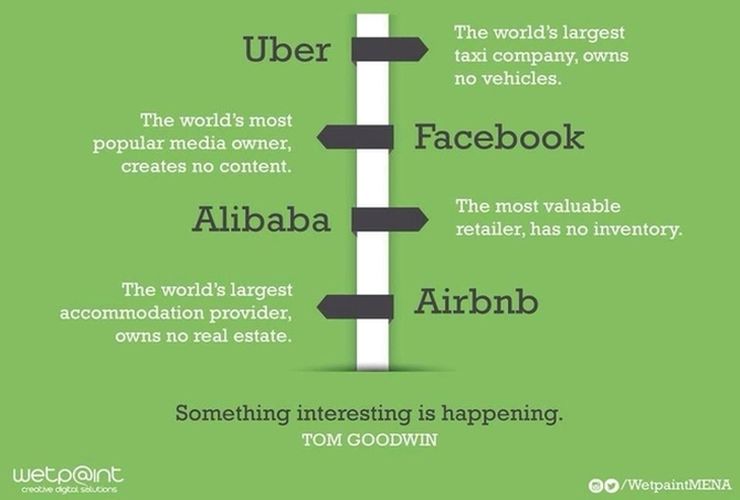 No doubt, you are wondering: What on earth is this blog post title supposed to mean?! Briefly, it is a way of saying that customer interface seems to be that thing which separates two fundamentally different realities; in the words of James Jones - the author of the book that inspired Terrence Malick’s film - "the thin red line that divides the living from dead".

The new realities of our highly digitized and mobile world is showing interfaces can bring in a much higher ROI than a well established supply chain. At least, that is the argument that Tom Goodwin made in a TechCrunch post entitled "The Battle Is For The Customer Interface" and published in March this year.

The argument is really simple: observe what is it exactly that makes the money in the last decade. The infographic presented above (via Wetpaint-mena.com) captures it well - all these companies (and many more besides, not mentioned here) make money as intermediaries. What they sell, in effect, is an interface! Uber, Instacart, Alibaba, Airbnb, Seamless, Twitter, WhatsApp, Facebook, Google managed to create useful interfaces for millions of people. More and more, customers interact primarily not with product or service providers but with whomever can - to cite Goodwin - "monetize our attention".

Why the thin red line?

Whenever people talk about the Terrence Malick’s film "The Thin Red Line", the title is almost inevitably the center of at least some discussion and debate. The thin red line turned into a meme, usually meaning the demarcation between life and death.

It is in this sense that we are using it here, arguing that the capacity to successfully interface between services or products and will prove to be the thin red line of a lot of businesses of today. Some will create for themselves or for others a successful interface and thrive and others will neglect it and fail.

Why not start creating your own interface?

If you your business is going to survive and thrive you need to start thinking in terms of how you access your customers. We have been advocating for some time now that mobile apps geared to take advantage of the social networking humans are capable of is the most efficient business model out there.

From the outset we wanted to provide a set of tools for the mobile device that will allow your business to grow. We have focussed on 3 core elements that every business requires: Retain those hard earned customers, Attract new customers and Engage your customers so that, ultimately, you sell more service or products.

Our mobile app brings those core elements together and links them in such a way as to maximize the value of your existing customer base uses them to attract new clients, that are then retained through our loyalty programs and other tools such as over the air voucher distribution, push messaging and geo-fencing, which also encourages your customers to buy more products or services.

Are you building your own customer interface or are you waiting to pay someone else for the privilege of using theirs’? Call us now and you can have your own app in no time!